Leishmaniasis is a disease caused by parasites belonging to the genus Leishmania. These parasites are spread to human hosts by blood sucking sand flies. Humans and sandflies aren’t the only host for Leishmania parasites; many different animals – such as dogs and rats – can be infected by some of the species that also infects humans. This means that in many areas, eradicating leishmaniasis would be difficult since the parasite can survive even if all human hosts are diagnosed, isolated and treated.

In the host’s body, the parasite can cause various types of leishmaniasis, such as visceral, cutaneous and mucotaneous leishmaniasis. Visceral leishmaniasis causes one or more skin wounds and can be diagnosed by analysing a tissue sample from the wound. Visceral leishmaniasis infects internal organs, and a bone marrow sample can be required to make a definite diagnosis. A blood sample can be tested for antibodies, but antibodies can still be present after a past infestation and will therefore not tell us with any certainty if there is an ongoing infection or not.

Which species can cause leishmaniasis in humans?

Of the species belonging to the genus Leishmania, slightly more than 20 have been identified living in humans suffering from leishmaniasis. There is also a number of species that we know can infect other mammals, but that have (so far) never been discovered in humans. Their ability to successfully infect humans therefore remains unknown.

Here are a few examples of species know to infect humans:

Where can I catch leishmaniasis?

This disease is chiefly associated with tropical and subtropical parts of the world. Leishmaniasis is especially common in parts of Africa and Asia (including the Middle East), in Mexico, and in parts of Central- and South America. It is also present in some countries in southern Europe. The disease is rare in the United States, but cases (and not just imported cases) are sometimes reported from the southernmost part of the nation, including Texas and Oklahoma.

Can I be vaccinated against leishmaniasis?

No, there is no vaccine available against leishmaniasis.

Also, no medication is recommended as a prophylaxis against leishmaniasis when visiting risky regions.

If the parasites cause one or more skin wounds, it is called cutaneous leishmaniasis. This is the most common form of leishmaniasis. 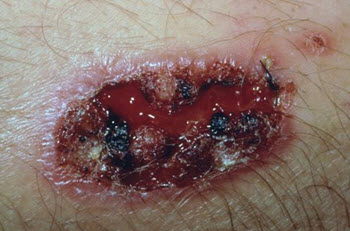 The skin wound will often heal on their own without medical treatment, but it can take a long time (sometimes years) and leave substantial scarring behind. Also, having an open wound on your skin will increase the risk of bacterial infection, etc. In addition to this, there is a risk of the parasites spreading to other parts of the body, causing other – more serious – types of leishmaniasis.

How painful a leishmaniasis wound can vary, not just from one person to the other but also over time. The wound will typically start out as a bump on the skin, and then gradually develop an open wound at the top of the bump, often with an elevated rim surrounding the open sore. Scabbing can occur as the body tries to seal the opening.

The mouth, the nose and the throat are all examples of places where mucotaneous leishmaniasis can appear.

When the parasites attack one or more internal organs, the disease is called visceral leishmaniasis. Liver, spleen and spinal cord are examples of organs that can be infested with Leishmania parasites.

Developing visceral leishmaniasis soon after being infected with the parasites is unusual; noticing the first symptoms months or years later is much more common. This can make diagnosis difficult; you might not even remember that you got bitten by a sandfly during your tropical vacation several years ago. Exacerbating this problem is the fact that many of the symptoms are vague and can be attributed to a wide range of health problems. You may for instance start losing weight, get a fever and develop anaemia, leukopenia and trombocytopenia. The exact symptoms will depend on what or which organs that are under attack. Infested organs can become swollen.

Several factors need to be taken into account when selecting medicines for the treatment of leishmaniasis. Which species is causing the problems? Where in the world was the disease contracted? Which type of leishmaniasis are we dealing with and how dangerous is it? How far has the disease progressed and which organs are impacted so far? How well will the patient be able to handle side effects of the medication?

During cold therapy, the wound is treated using liquid nitrogen.

During cold therapy, the wound is treated with radiovawes.