Chagas disease, also known as American trypanosomiasis, is caused by the parasite Trypanosoma cruzi. The name Chagas disease is derived from Dr Carlos Chagas from Brazil who identified the disease in 1909.

The most common transmission route is contact with the faeces of certain blood-sucking bugs that serves as intermediary hosts for the parasite. 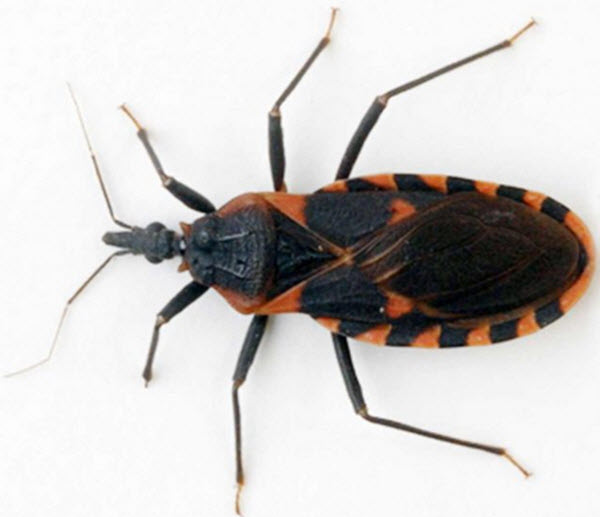 It is chiefly associated with humble abodes in the countryside, where blood-sucking triatomine bugs live in thatched roofs, cracked walls, etc.

After being bitten by an infected bug

The most common transmission route is from the faeces of blood-sucking bugs infested with the parasite. Blood-sucking bugs capable of spreading Chagas disease are fund within several different genera, including Panstrongylus, Rhodnius and Triantoma.

The parasites can not penetrate intact skin, but many people unknowingly help the Chagas parasites into the body by scratching at the bite site, moving the faeces of the bug into the wound created by the bug, or even creating scratches in the skin through which the parasites will gain access.

The parasites can also enter through mucous membranes, e.g. if you first scratch the bite site and then scratch your eyes.

The blood-sucking bugs responsible for spreading Chagas disease will typically bite at night and many people never even wake up when it happens. The unknowing victim automatically scratches the bite site in their sleep, helping the parasites to get in.

Since parasites can enter through mucous membranes it is possible to catch Chagas disease from food, drink, etc that has been contaminated with parasites, but this transmission route is rare.

This disease consists of two stages, the acute stage and the chronic stage, and the symptoms will very depending on which stage the disease is currently in.

It is very common to notice no symptoms or mild symptoms only right after transmission. A lot of people will therefore go through the acute stage of Chagas disease without realizing that they have been infected. The acute phase will typically go on for anywhere from a few weeks to a few months after the transmission date. 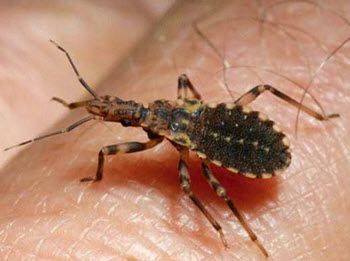 If the parasites went through the mucous membrane of the eye, causing the eyelid to become swollen, this swelling is know as the Romaña sign. The Romaña sign is often accompanied by eye inflammation. Please note: The Romaña sign will typically take weeks to disappear. If the swelling is only present for a week or so before vanishing without treatment, it is usually just an inflammation caused by the body reacting to compounds present in the faeces of the triatomine bug.

Is the acute stage dangerous?

The acute stage of Chagas disease is usually not dangerous.

In rare cases, the parasites can attack vital parts of the body during the acute stage, such as the brain, the membrane of the brain or the heart muscle. Such attacks can be very serious – even lethal. Small children and people with a weak immune system are especially susceptible to being severely ill during the acute stage of Chagas disease.

For many people, the symptoms associated with the acute stage of Chagas disease will vanish even without treatment and the person will not know of the infection. The disease will now enter into its chronic stage.

It is not unusual for infected people to remain in the chronic phase for the rest of their lives and eventually die of completely unrelated causes without ever again experience any symptoms of Chagas disease. The parasites can also remain in the body without causing any symptoms for several decades and then suddenly start causing problems – sometimes very severe problems with a potentially lethal outcome.

A person infected with T. cruzi has a 30% risk of developing serious problems due to Chagas disease at some point in life.

Examples of health problems that can be the result of chronic Chagas disease:

An alternative method is to test the blood for antibodies against T. cruzi, but this will not tell you if there is an ongoing infection or not. The antibodies can be left there from a previous infection.