Strongyloidiasis is a disease caused by parasitic nematodes (round worms) belonging to the genera Strongyloides. Even as adults these round worms are very small – no longer than 1.5 mm.

Strongyloidiasis is especially associated with tropical and subtropical parts of the world, but you can catch the disease anywhere in the world if you’re unlucky since the parasite can spread directly from one person to the other without needing any intermediary host that would limit its geographical range. There are for instance numerous examples of how military staff infected in South East Asia have spread strongyloidiasis within the United States after returning home from active duty. 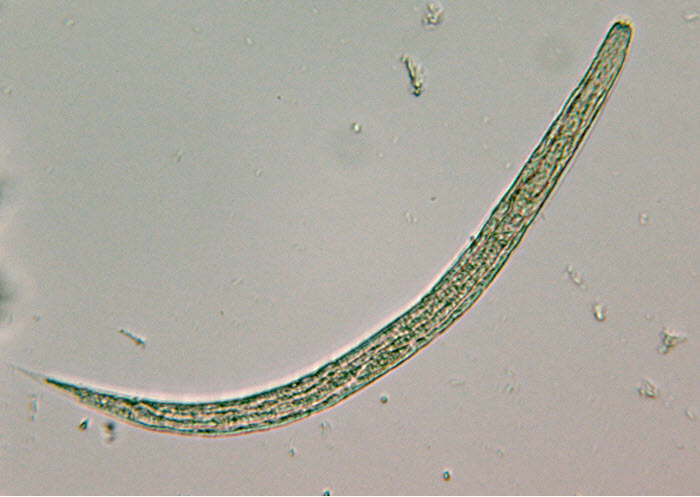 The most common transmission route is through soil containing free living parasites.

You don’t need to ingest the soil or get it on a mucous membrane to get infected – the parasites can pierce through intact skin. Walking barefoot or doing gardening chores without gloves can be enough.

Direct infection from human to human is possible. The nematodes present in the faeces of an infected human is ready to infect another human right away; no other animal is needed as an intermediary host.

Strongyloides nematodes can be transmitted through organ transplant if the donor is infected.

A person with a strong immune system and no underlying health problems will often notice no symptoms or only mild symptoms when infected with Strongyloides nematodes. There are plenty of examples of people who got infected a long time ago and then unknowingly carried the nematodes inside for years or even decades until something else weakened the body’s immune system and the nematodes began causing symptoms.

Entry stage: When the nematodes pierce through the skin, they can cause localized skin irritation.

Approximately two weeks after the infection date: This is when you might start noticing symptoms from the digestive tract, such as heart burn, stomach pain and gassiness. Some people develop alternating constipation and diarrhoea.

Migratory stage: As parasites in their larval stage start migrating throughout the body you may develop skin problems, such as hives. A red rash on the buttocks and around the waist is another tell-tale sign.

Symptoms from the respiratory tract and digestive tract can manifest together with the skin problems. None of the three symptom groups are mutually exclusive. 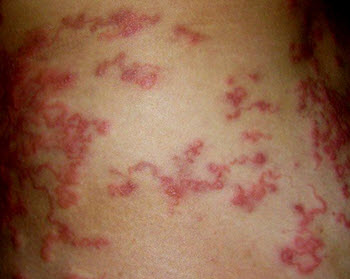 As mentioned above, strongyloidiasis hyper infection syndrome is typically only seen in patients with a weakened immune system. This can be caused by various underlying problems, such as HIV infection, serious malnutrition, radiation sickness, late stage tuberculosis, late stage syphilis, aplastic anaemia, or immune-suppressive treatment (e.g. after an organ transplant).

Blood, faeces and/or duodenal fluid can need to be analysed when strongyloidiasis is suspected.

Checking the faeces only is perilous, since a person can be infected without excreting parasites in their stool.

In some countries, specialized laboratories will do parasite cultures when strongyloidiasis is suspected. One such lab is found within the School of Tropical Medicine in London.

The parasites are sensitive to several different anti-parasite medications, including common medicines such as ivermectin, thiabendazole and albendazole.

Ivermectin is a common treatment choice and is very efficient in killing adult parasites. Typically, at least two treatment rounds are necessary. You want to make sure that all parasites that were juvenile during the previous treatment round are killed.

It is important to carry out all treatment rounds even if your symptoms disappear after the first round. Vanishing symptoms doesn’t automatically mean that all the parasites are dead.