East African trypanosomiasis is caused by the parasite Trypanosoma brucei rhodesiense. This parasite is spread to humans by blood sucking tsetse flies.

Without successful medical treatment, East African trypanosomiasis typically leads to the death of the infected person within a few months after the date of transmission.

A majority of all reported cases of East African trypanosomiasis are from Zambia, Tanzania, Malawi and Uganda.

The normal form of transmission is through the bite of an infected tsetse fly. Being bitten by a tsetse fly is typically something that you notice, because it tends to hurt quite a bit. Sometimes, a red wound known as a chancre will develop around the bite site.

Blood transfusions where the blood donor is infected with the parasite is another possible transmission route.

An infected pregnant woman can transmit parasites to her child.

The first symptoms typically appear within one to three weeks after the fly bite. The symptoms tend to be vague and mistaking them for some other health problem is easy. The infected person might for example become tired and irritated, with a fever and swollen lymph glands. Other possible symptoms are a skin rash and painful joints and muscles. If a head ache occurs, it can be very painful.

Eventually, the parasites reach the central nervous system (CNS). This is when CSN related symptoms begin to appear, such as numbness, sleep disturbances and lack of coordination. Personality changes and increasing confusion can set in.

The parasites will usually need several weeks to progress from the bite wound to the CSN.

Without successful medical treatment, East African trypanosomiasis is usually fatal within a few months after transmission. 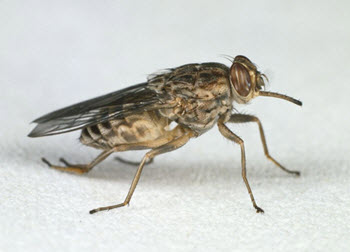 The recommended treatment depends on how early the disease is diagnosed. If the disease is still in its early stages and the patient isn’t exhibiting any symptoms indicating an infestation of the central nervous system, East African trypanosomiasis is usually treated with a medicine called suramin. The suramin is injected into a vein (intravenous administration).

If there are symptoms from the central nervous system, using a medicine named melarsoprol is more common. Just like suramin, it is administered intravenously.

This might seem like a small difference, but it can have huge consequences for the infected person. Without treatment, West African trypanosomiasis usually have a deadly outcome within a few years after transmission. With East African trypanosomiasis on the other hand, the death of the infected person typically occurs within just a few months after transmission, unless the person receives successful treatment.

The recommended medical treatment choices differ somewhat between T. b. rhodesiense and T. b. gambiense.