Without successful medical treatment, West African trypanosomiasis is typically fatal within a few years after transmission. 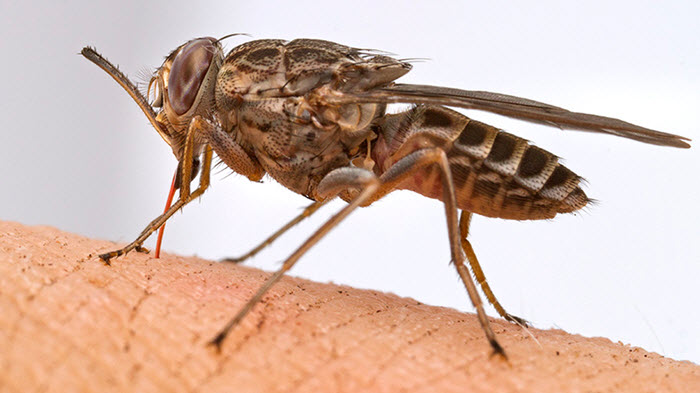 Where in the world is West African trypanosomiasis most common?

The first symptoms of West African trypanosomiasis typically occur one to three weeks after being bitten by in infected tsetse-fly. The bite of a tsetse-fly is usually painful, so you are probably aware of the fact that you have been bitten. In some people, a red wound will form around the bite site. This wound is known as a chancre, and it is possible to diagnose West African trypanosomiasis by analysing a tissue sample from such a wound.

The early symptoms are West African trypanosomiasis are very easy to mistake for other health problems. You might for instance become tired and develop a fever and swollen lymph glands. Other possible symptoms are head aches, muscle- and joint pains, skin rash, itchy skin, swollen hands and a swollen face.

Even though early symptoms typically manifest within three weeks after the bite, there are plenty of cases where no symptoms of West African trypanosomiasis developed until several months after the fly bite. If you have been bitten by a tsetse-fly in a risky region of the world, don’t neglect symptoms of West African trypanosomiasis even if the bite occurred several months ago.

As the disease progresses, weight loss is common. Eventually, the parasites will start attacking the central nervous system and the infected person will experience symptoms related to this. A tell-tale sign is being sleepy in the day time and having difficulties sleeping at night time. The infect person can exhibit personality changes and become increasingly confused.

Without proper treatment, the symptoms will worsen over time. Death will usually occur within a few years after the tsetse-fly bite.

Your doctor will need have a blood sample and/or spinal fluid sample from you analysed in order to confirm that your symptoms are in fact caused by West African trypanosomiasis.

If your lymph glands are swollen, liquid from any of them can be analysed as well. 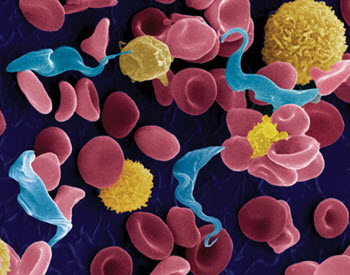 The recommended treatment depends on how far the disease has progressed. If there are no indications of the parasites having reached the central nervous system yet, West African trypanosomiasis is usually treated with a medicine called pentamidine. The pentamidine is injected into a vein or into a muscle.

If symptoms indicate that the central nervous system is under attack from the parasites, the doctor is more likely to administer a combination of nifurtimox and eflornithine. As this stage, the disease is more difficult to treat successfully, even when these medicines are available. Also, CNS damage that has already occurred will not vanish automatically just because the parasite is killed.

An alternative to the combo nifurtimox + eflornithine is melarsoprol, but this drug can produce some pretty serious side effects.