Yellow fever is a viral disease spread by mosquitoes (chiefly Aedes-mosquitoes). Mosquitoes can transmit the virus from human to human, and also between humans and certain non-human primates.

Among other things, yellow fever infection can cause lethal liver failure.

The disease is endemic to Africa and Central- and South America. In these areas, most cases are reported from 15° north of the equator to 15° south of the equator. Examples of countries were yellow fever is comparatively common are Cameroon, Republic of Congo, Democratic Republic of Congo, Cameroon, Côte d’Ivoire (Ivory Coast), Senegal, Sierra Leone, Uganda, Sudan, South Sudan and Tchad. At the time of writing, no case of yellow fever has been reported from South American since 2010.

In the United Kingdom, yellow fever vaccinations are only given at designated centers registered with either the National Travel Health Network and Center or with the Health Protection Scotland.

Yellow fever vaccination is usually not available for free on the NHS.

On average, you can expect to pay around £60 for the yellow fever vaccination.

The yellow fever vaccine is given as a single injection.

Small children are usually injected in the leg, older children and adults in the upper arm.

To ensure adequate protection, the vaccine should be given a minimum of 10 days before departure.

Many countries will not accept your proof of vaccination against yellow fever if it is younger than 10 days.

The yellow fever vaccine provides protection for 95-100% of those who receive it. 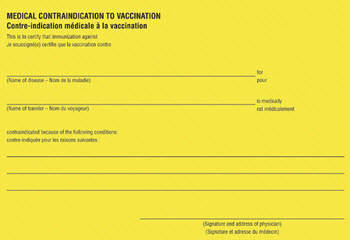 Earlier, a booster dose was recommended every 10 year. Recently, experts working for the World Health Organization (WHO) suggested that booster doses may not be necessary, and from June 2016 vaccination certificates will be valid for life instead of just 10 years.

Right now, a booster dose is recommended if:

A list of all the countries that require you to have an International Certificate of Vaccination or Prophylaxis (ICVP) as proof of yellow fever vaccination can be found here: http://www.who.int/ith/ITH_country_list.pdf

Side effects of yellow fever vaccination

Unlike many other vaccines, the yellow fever vaccine contains viruses that are still alive. This increases the risk of certain side effects.

Examples of common side effects of yellow fever vaccination

Examples of rare side effects of yellow fever vaccination

The risk of YEL-AND and YEL-AVD is higher for young babies and elderly people.

Should I avoid yellow fever vaccination?

Since the risk of serious side effects are larger for certain groups, the vaccine is generally not given to:

The incubation period for yellow fever is typically 2-6 days.

Many of those who are infected with the virus develop no symptoms or only mild symptoms.

The first symptoms of yellow fever are usually fever, headache and muscle-ache, sometimes accompanied by nausea and diarrhea. The person will often feel better after just 3-4 days, and for many, the disease is now over. For roughly 15%, the disease will instead enter into its second stage.

During the second stage, the fever will return and this time the symptoms will much more severe. If the liver fails to work property, skin and eyes will takes on a yellowish tint. This is what gives the disease its name.

On average, persons that develop serious second-stage symptoms such as liver problems and bleedings have a survival rate of 50% – 80%. Those who die of yellow fever typically do so within two weeks from the onset of the disease.

There is no specific medical treatment against the virus. Hospital care will be focused on handling symptoms and complications, e.g. by providing dialysis and blood transfusions. Antibiotics can be used to combat opportunistic bacterial infections.